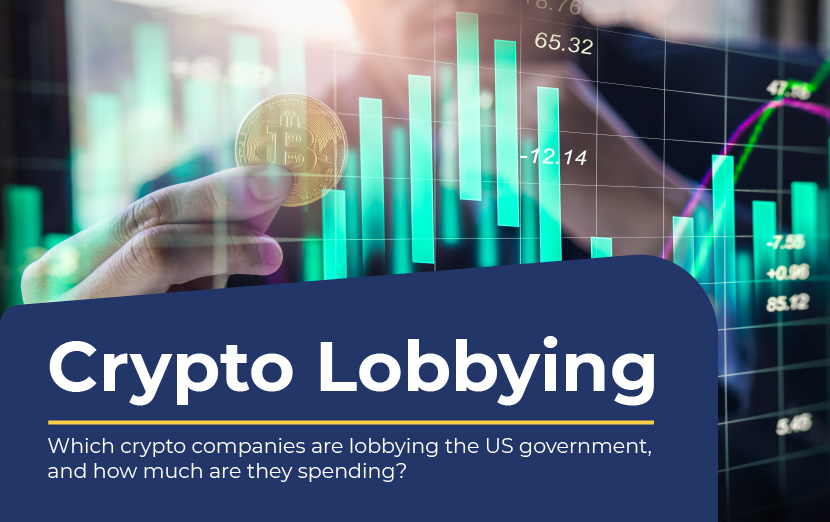 Lobbying is a process by which companies and organizations attempt to influence decision making in government, often spending vast sums of money on professional lobbyists who have the connections and know-how to get their clients’ agenda adopted by politicians and decision makers.

While it may sound ethically dubious to some, lobbying is a perfectly legal process that is even protected in United States law, making it an integral part of government practice. However, some still see lobbying as an unwelcome feature of modern policymaking, as it gives large companies and organisations an additional voice in government that everyday voters simply do not have.

Despite any public misgivings, lobbying is carried out by companies from every industry and sector as they vie for control of the political agenda, steering politics in a favourable direction for their business. As such, lobbying is often necessary for industries that employ new technology such as cryptocurrency and blockchain to gain a foothold in the American market and secure their place in the wider economy.

With this in mind, we wanted to find out which crypto companies have engaged in lobbying the US government, revealing just how much each organisation has spent on lobbying in 2021.

Here we can see the breakdown of crypto lobbying in 2021. We’ve uncovered which companies have spent the most money on lobbying this year, as well as how many lobbyists each has employed to secure their interests in Washington.

Below you can see the total lobbying expenditure of crypto companies in 2021, ranked from highest to lowest. As a very general rule of thumb, the more money a company or organisation can spend on lobbying, the greater effect it can have on public policy and decision making.

An Important Note: These are the total lobbying expenditures for companies that are involved with crypto, not the lobbying spend on crypto or about crypto specifically. 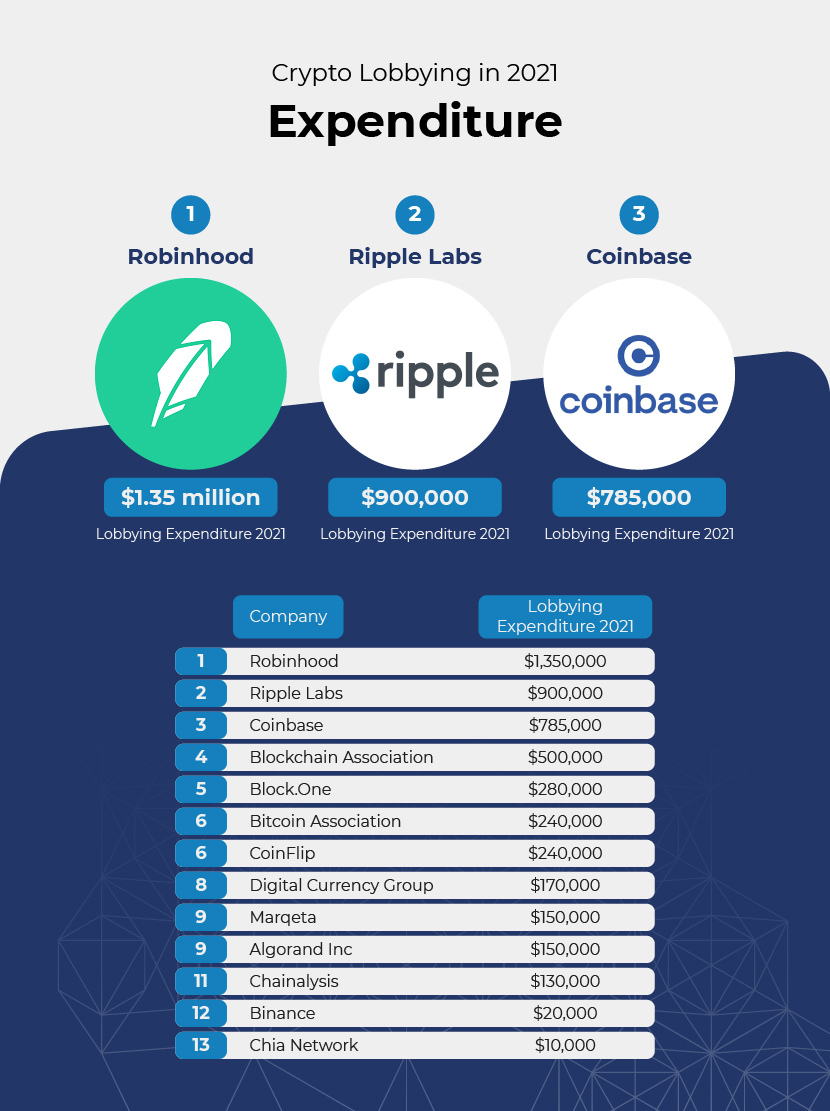 The crypto company that has spent the most money on lobbying in 2021 is Robinhood, the trading platform which has incorporated cryptocurrencies into its offering of available trading options. Having spent as much as $1.35 million dollars in 2021 alone, they are well ahead of any other crypto company in terms of lobbying expenditure.

Ripple Labs has spent the second-largest amount on lobbying in the USA in 2021, with their total spending reaching $900,000. Ripple Labs is responsible for creating the real-time currency exchange platform Ripple, the token for which is XRP. While based on blockchain technology, Ripple uses a distinct distributed consensus ledger to process transactions.

Available in over 100 countries, Coinbase is the largest crypto exchange by trading volume, and is now also the third biggest lobbyist among crypto companies, having spent $785,000 in 2021 on lobbying in the United States.

We’ve also taken note of the number of lobbyists employed by each crypto company in 2021, as well as the number of these that are ‘revolvers’, a term referring to government regulators, Congressional staff or members of Congress who take jobs in lobbying firms, making the most of their insider knowledge.

The crypto company with the largest number of lobbyists employed in 2021 was Coinbase, which had 23 separate lobbyists acting on their behalf. Of these 23, as many as 19 are so-called ‘revolvers’ meaning that they are particularly well-connected and understand the inner workings of government decision making.

In second place is Ripple Labs, which hired 12 separate lobbyists to represent their interests in Washington, eight of whom are ‘revolvers’.

Robinhood Number of Lobbyists in 2021: 3

Robinhood is the crypto company with the third-highest number of lobbyists in 2021, with a total of 3 employed by the company.

Having looked at the figures for 2021, we also wanted to get a better idea of the longer-term picture of lobbying in the crypto industry. By looking at data for the past five years we can see which companies have spent the most on lobbying over a longer time period, as well as just how much the industry has spent on lobbying as a whole.

Here we can see the yearly total lobbying expenditure by companies and organisations in the crypto sector since 2017, as well as the yearly increase and five year total.

Each year, the total spent on lobbying has increased considerably, with the largest percent increase being in 2018, when lobbying expenditure rose from $200,000 to $920,000. However, the largest real increase was from 2020 to 2021, with expenditure rising by $2.65 million!

At the end of 2021, the total crypto lobbying expenditure stands at $9.56 million, and if the yearly figure keeps on increasing in 2022, this could easily reach $15 million if not more by the end of next year. 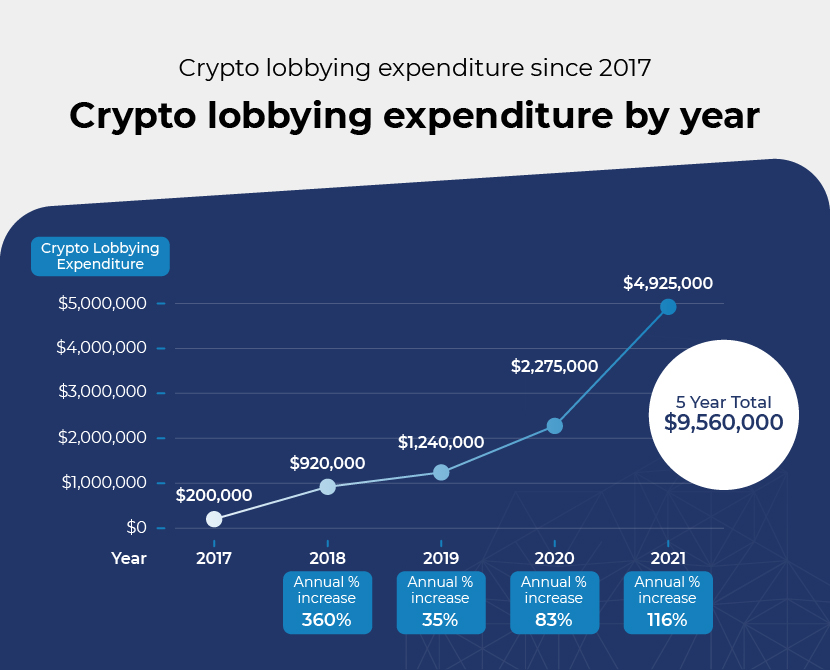 Here we can see the lobbying expenditure of crypto companies for the past five years, ranked according to their five year total. 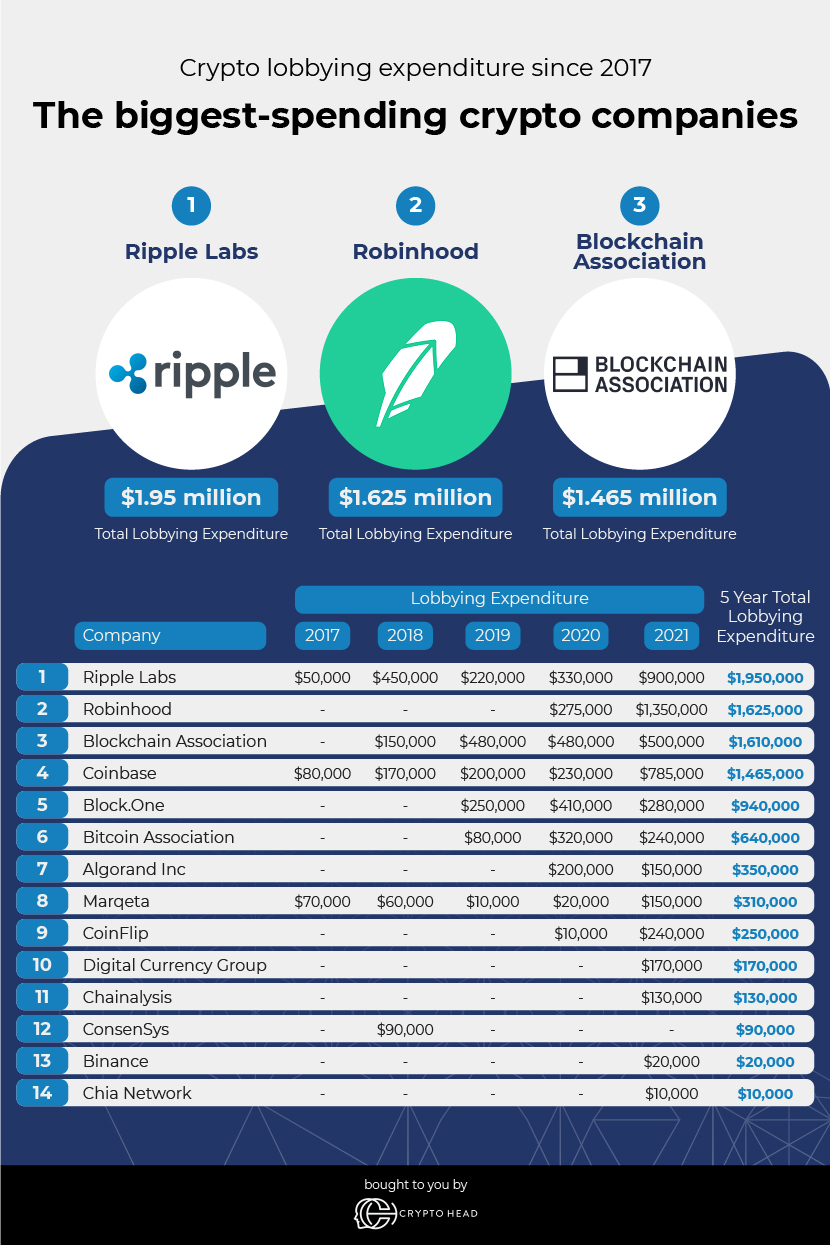 Ripple Labs has spent the most money overall on lobbying since 2017, with a combined expenditure of $1.95 million. This makes Ripple Labs possibly the most influential crypto company in the USA when it comes to affecting government policy and regulation.

Robinhood is the second biggest spender when it comes to lobbying in the USA, having spent $1.625 million dollars over the last five years. Despite having only offered cryptocurrency trading options on its platform since January 2018, Robinhood has without doubt become a major player and influential organisation in the crypto sector.

In third place, having spent $1.465 million on lobbying in the USA since 2017, is the Blockchain Association. This association of industry leaders represents a unified push from the blockchain and cryptocurrency world for greater innovation and collaboration in using this new technology to transform digital and financial services, placing the USA at the forefront of this movement.

We wanted to assess the extent to which crypto companies have engaged in the practice of lobbying in the USA. To do this, we used data from Open Secrets revealing the yearly spending on lobbying in the USA among selected companies and organisations, as well as the number of lobbyists employed by each. We included any organisation with an overt involvement in cryptocurrencies and blockchain technology and ranked them according to their 2021 expenditure, the number of lobbyists employed in 2021, and the total amount spent on lobbying since 2017.